Taxon Sample Size in Hominin Baraminology: A Response to O’Micks

In a recent paper, O’Micks analyzed the cranial and postcranial characters for six hominin taxa and concluded that the recently discovered Homo naledi was “probably not part of the human holobaramin.” Consideration of postcranial characters is desirable in baraminology; however, previous studies of hominins have shown that reducing the taxon sample size can result in spurious baraminic distance correlations not seen in larger taxon samples. Re-analysis of O’Micks’ character sets show that the lack of baraminic distance correlations is likely the result of a small taxon sample. Therefore, excluding Homo naledi from the human holobaramin is an unwarranted conclusion from O’Micks’ results.

Distinguishing human beings from animals based on a fragmentary fossil record remains a challenging and somewhat controversial problem among young-age creationists. Whereas statistical baraminology can offer some guidance in recognizing members of a baramin (e.g., Wood 2016a), the dearth of fossils, taxa, and character states prove challenging to the methodology. Despite the many fossils discovered in the last 20 years (Wood 2016b), even evolutionists are uncertain of how to name individual species (e.g., see Wood and Boyle 2016). Of particular interest to creationists are the hominin baraminology studies that focus almost exclusively on craniodental characteristics (O’Micks 2016a; Wood 2010, 2016b), which falls short of the ideal of the “holistic” character sets recommended by Wood and Murray (2003, 24–29). Since postcranial characteristics have traditionally been relied upon to distinguish human from nonhuman fossils (e.g., Hartwig-Scherer 1998), integrating postcranial and cranial characters for statistical baraminology of hominins should be a priority for creationists interested in hominin baraminology.

Here, BDC is calculated for three different sets of characters using the same six taxa used by O’Micks (2016b) using standard unweighted baraminic distances. All calculations filtered characters at a character relevance of 0.75, and bootstrap values were obtained from 100 pseudo-replicates of each character set. The first set of characters are O’Micks (2016b) 37 postcranial characters. After filtering for character relevance, 26 characters were used to calculate baraminic distance and BDC. The results (Fig. 1A) reveal only two instances of significant, positive BDC, between H. sapiens and H. neanderthalensis and between H. naledi and A. africanus. Bootstrap values for these positive correlations exceeded 90%. There were also five instances of significant, negative BDC between H. sapiens, H. neanderthalensis and other taxa, but these negative correlations had poor bootstrap values (<90%). 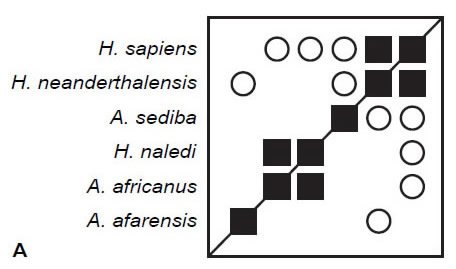 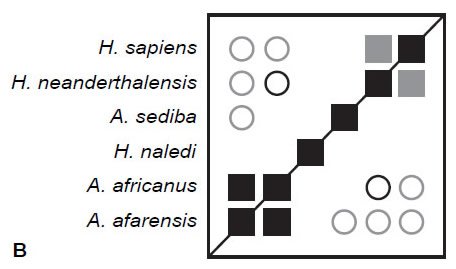 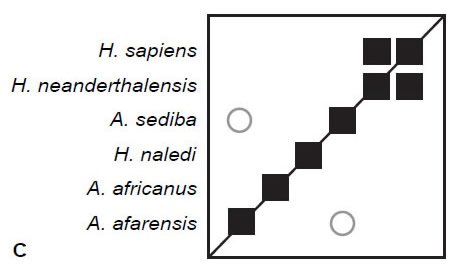 Multidimensional scaling of each set of baraminic distances does not add substantively to the interpretation of the BDC results. All three datasets show diffuse clouds of taxa with little clustering (Fig. 2), as seen in Wood’s (2013) results. 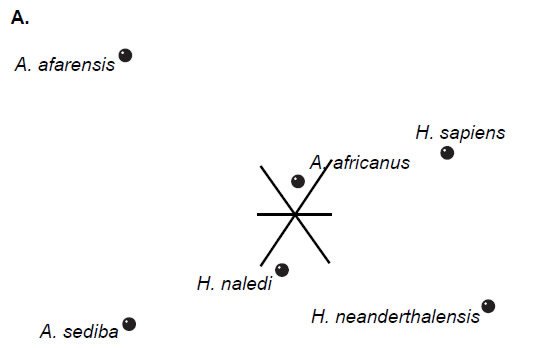 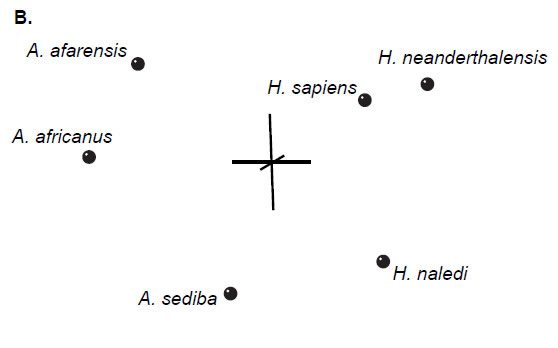 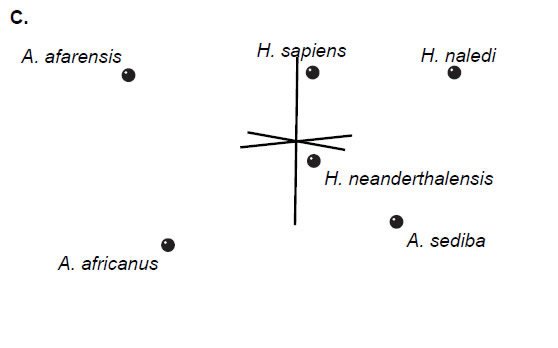 In each of these character sets, we see sparse BDC with poor bootstrap values, which parallels O’Micks’ (2016b) results based on a composite character set with weighted baraminic distances. Most importantly, we find here that reducing the taxon sample for craniodental characters results in a loss of BDC that was observed in the larger sample, as Wood (2013) observed previously. Wood’s (2016b) analysis of Berger et al.’s (2015) 87 craniodental characters revealed significant, positive BDC between all taxon pairs within genus Homo (Fig. 3). Here, with the same 87 characters, reducing the sample size to just six taxa results in only one correlation within genus Homo. Thus, the loss of statistically significant BDC reflects a statistical artifact arising from a small taxon sample size. 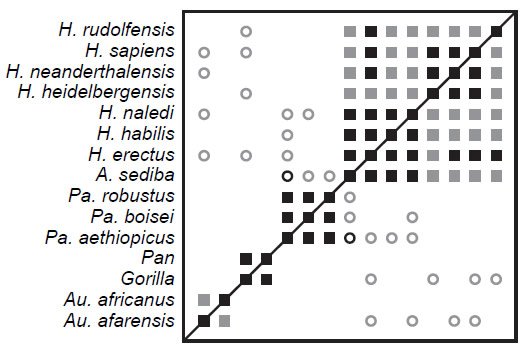 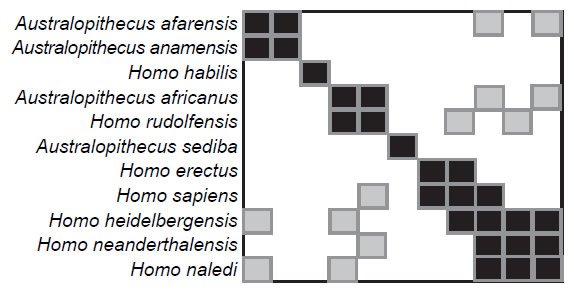 Thus, an evaluation of the effect of taxon sample size on O’Micks’ (2016b) results indicates that the observed change in correlations cannot be unambiguously attributed to the addition of new characters rather than the reduced taxon sample size. Further, even if we concede that were biologically relevant, the lack of significant positive or negative correlations for any taxon pair involving H. naledi (Fig. 4) should be interpreted as a lack of evidence regarding H. naledi’s baraminic affinities. Lack of correlation could be the result of statistical artifacts (as shown here), discontinuity, or extreme intrabaraminic diversification. O’Micks’ (2016b) results cannot distinguish these possible explanations, and here we see that his results are likely statistical artifacts.

What should we say then about Homo naledi? The current statistical baraminology results (O’Micks 2016a, b; Wood 2016b) all support either including H. naledi in the human holobaramin or at the very least not excluding it from the human holobaramin. The evidence of intentional burial or “body disposal” (Dirks et al. 2015; Randolph-Quinney et al. 2016) also supports recognizing Homo naledi as human (Wise 2016). This certainly challenges our understanding of human postcranial diversity, but there is no a priori reason to believe that humans could not diversify in body form. We already know that human postcranial diversity was once greater than it is today, since the Old Testament records the existence of giants (e.g., Deuteronomy 3:11, 2 Samuel 21:15–22), which must have had a much larger postcranial skeleton than extant humans. Most importantly, we must remember that all human beings, whatever their appearance, are descendants of Adam and Eve, made in the image of God, and eligible for salvation by faith in Christ’s redemptive work on the cross.

O’Micks, J. 2016a. “Preliminary Baraminological Analysis of Homo naledi and its Place within the Human Baramin.” Journal of Creation Theology and Science Series B: Life Sciences 6: 31–39.

O’Micks, J. 2016b. “Homo naledi Probably Not Part of the Human Holobaramin Based on Baraminic Re-Analysis Including Postcranial Evidence.” Answers Research Journal 9: 263–272.

Wood, T. C. 2016a. “A List and Bibliography of Identified Baramins.” Journal of Creation Theology and Science Series B: Life Sciences 6: 91–101.

Wood, T. C. 2016b. “An Evaluation of Homo naledi and “Early” Homo from a Young-Age Creationist Perspective.” Journal of Creation Theology and Science Series B: Life Sciences 6: 14–30.

The Evolution of Asexual to Sexual Reproduction: The Queen of Evolutionary Problems

The evidence is overwhelming and widely recognized by evolutionists that evolution by small steps cannot bridge the transition from asexual to sexual reproduction.

The History of Using Radiation to Speed Up Evolution

The history of the mutation theory as the foundation of the source of new genetic information is reviewed.