Evolution of the Pancreas

No invertebrate has a pancreas; it is employed only in vertebrates. According to evolutionists, the first organs in subphylum Vertebrata with a pancreas were the armored fish called placoderms; allegedly also the first jawed vertebrates to evolve. Furthermore, in terms of anatomy and physiology the pancreas is very similar in all vertebrates. All vertebrate pancreases have an endocrine function producing insulin, glucagon, and somatostatin hormones, as well as exocrine functions producing digestive enzymes. For vertebrates, the pancreas is a vital organ required for survival. There is, consequently, an unbridgeable gap between organisms possessing a pancreas and those lacking one.

The Function and Design of the Pancreas

In humans the pancreas is an elongated organ located behind the stomach and across the back of the belly. The widest part of the organ, called the head, lies in the curve of the duodenum (see fig. 1). The tapered left side is the body and the end, near the spleen, is called the tail. The pancreas is the home of two gland types, endocrine and exocrine. Both have a vital role in the digestive system. The endocrine gland consists of the pancreatic islets (formerly called islets of Langerhans present throughout the pancreas which secrete insulin, glucagon, and somatostatin. Somatostatin regulates the blood sugar, glucose, by regulating the release of insulin and glucagon hormones into the bloodstream.

Glucose is the main source of energy for all of the body’s cells. During cellular respiration, glucose, in the presence of oxygen, is “burned,” producing carbon dioxide and water. This process releases the energy stored in glucose to “charge” ADP (adenosine diphosphate), which becomes the energized form called ATP (adenosine triphosphate) in the cell organelles called mitochondria.

When stimulated by low blood glucose caused by activities such as exercise, the pancreatic alpha cells secrete glucagon. Glucagon raises glucose levels by promoting the breakdown of glycolgen stored in the liver into glucose. When blood glucose level is too high, the pancreas secretes insulin which lowers blood glucose levels by facilitating its uptake by cells, particularly skeletal muscle cells. It also lowers glucose by promoting its use in the creation of proteins, fats, and carbohydrates. Certain byproducts of protein digestion stimulate insulin and glucagon release. 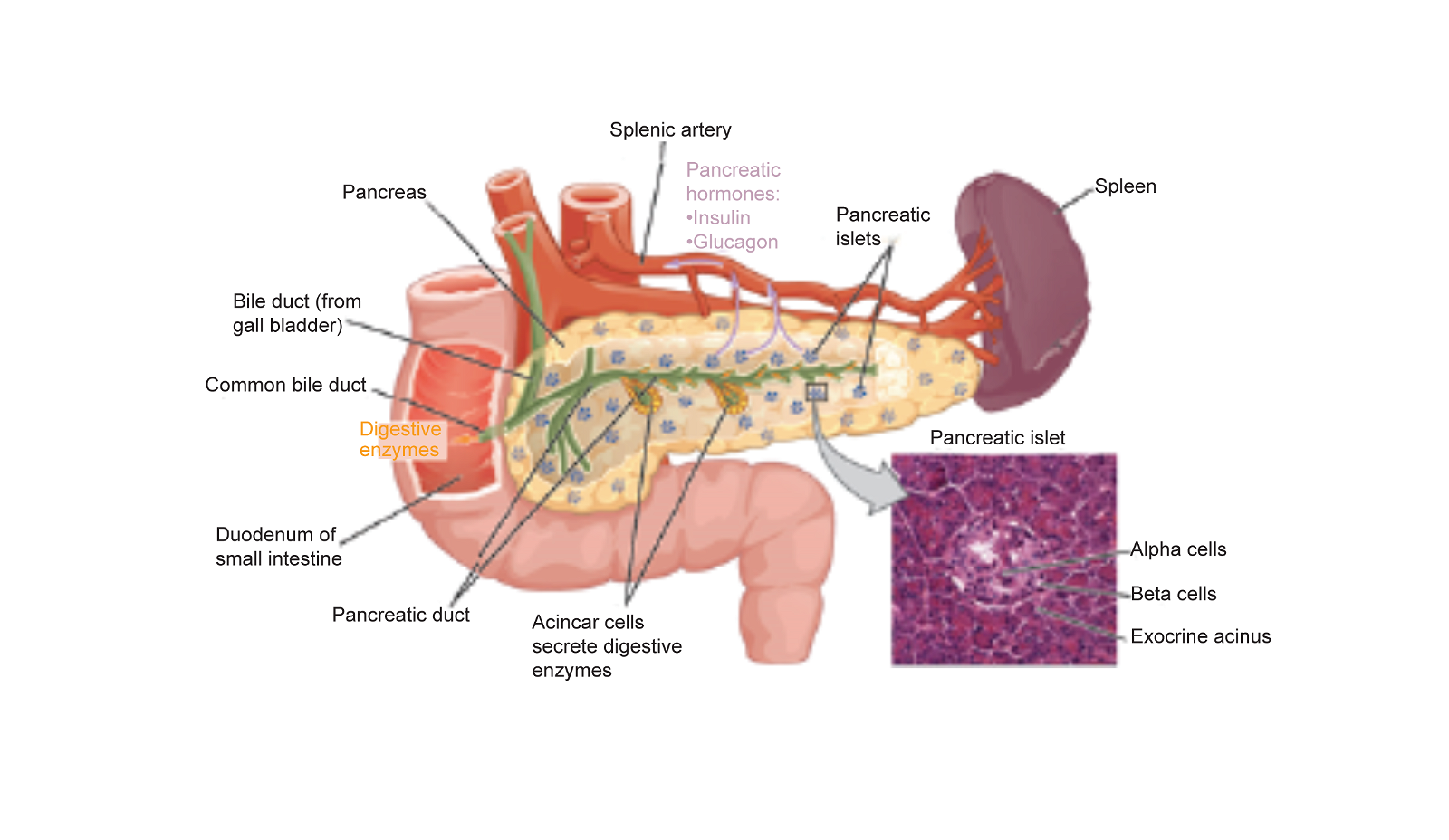 The autonomic nervous system also has a role in regulating insulin and glucagon which is why excitement energizes a person. The sympathetic nervous system activates both alpha 1 and beta 2 receptors. Activation of the Beta-2 receptors by catecholamines secreted from sympathetic nerves stimulates secretion of insulin and glucagon, providing energy. Conversely, activation of Alpha-1 receptors inhibits insulin secretion, causing relaxation. The net effect is greater glucose availability with a decrease in insulin sensitivity. Some insulin is important to “push” the glucose across cell membranes into the cells, especially muscle cells.

As an exocrine gland, the pancreas produces the body’s digestive enzymes. These enzymes are secreted via the pancreatic duct into the first section of the small intestine. And from there into a network of ducts that conduct them into the duodenum, the intestine section just below the stomach. These enzymes help to break down carbohydrates, proteins, lipids, and nucleic acids. The cells that produce these enzymes are arranged in clusters called acini.

The acinar cells secrete about 1.5–3 liters of digestive fluid daily. The digestive enzymes are released in an inactive form so as not to autodigest the pancreas. They are then converted to active enzymes in the duodenal lumen. This cannot be accounted for by evolution.

All evolving vertebrates would have died before successful implementation of this two pronged approach since the enzymes are made by two separate organs!

A variety of other mechanisms are required to ensure that the pancreatic enzymes do not digest the pancreas itself. These include the secretion of the protective enzyme trypsin inhibitor, which inactivates the protein-digesting enzyme trypsin. In addition, the acid neutralization brought about through bicarbonate secretion occurs only when needed.

When released into the duodenum, certain digestive enzymes are activated by the enzyme enterokinase which is present in the duodenum lining. Other enzymes secreted are involved in fat digestion, including lipase, phospholipase A2 (PLA2), lysophospholipase, and cholesterol esterase. Enzymes that break down starch and other carbohydrates include amylase. This brief review illustrates both the complexity and the integration of the pancreatic biochemical system.

Most of these enzymes are secreted in a fluid rich in bicarbonate to reduce the acidity of the stomach, which is close to a pH of 1.5, to achieve a less acidic pH of about 6.0 in the fluid leaving the stomach. 6.0 is the pH at which intestinal digestive enzymes function most efficiently. The pH gradually increases in the small intestine from pH 6 to about pH 7.4 in the terminal ileum, the same pH as the blood. Additionally, the pancreatic enterochromaffin cells secrete certain other hormones, including motilin, and serotonin, and a polypeptide with eleven amino-acid residues called substance P.

Other hormones secreted by the pancreas include secretin, cholecystokinin, vasoactive intestinal polypeptide, and even acetylcholine stimulation of the vagus nerve. The vagus nerve in the neck innervates most of the muscles of the pharynx and larynx, which are responsible for swallowing and vocalization. In the thorax, the vagus nerve provides the main parasympathetic nerve supply to the heart, regulating the heart rate. The vagus nerve is connected to areas of our brain’s limbic system which can cause physiological effects secondary to our emotional state. For this reason the vagus connection to the pancreas is another reason why emotions are so important in proper digestion.

This very abbreviated review of the functions of the pancreas illustrates its complexity and the fact that the entire pancreatic system must be in place in perfect coordination in order to function. If any of the many protective mechanisms in the system were to malfunction, the digestive enzymes would destroy, or seriously damage, the pancreas. The pancreas would not function properly until all of the systems briefly outlined above are in place, assembled properly, and are functional. Furthermore, the pancreas must be vascularized with veins and arteries, and must have ligaments to position the organ within the body. Also required is its integration into the duodenum and innervation with the appropriate nervous system to regulate its action.

I was unable to find a just-so story that even attempts to explain the pancreas’s possible evolution from some hypothetical pre-pancreas. Without all of its basic parts, the system will not function and vertebrate life would not be possible. The pancreas is a vital organ and if it malfunctions, a complex cocktail of drugs and supplements would be necessary in an attempt to keep one alive for a few months. Even chronic pancreatitis (inflammation of the pancreas) can drastically shorten one’s life (Napoli 2014).

Literature searches on the subject of the evolution of the pancreas usually locate articles that cover its development in the womb. They document that the mother and the placenta carry out most of the functions of the pancreas until birth. It functions independently only when a child is born. Smith and Bowe note that the “placenta has many essential functions during pregnancy . . . one of its roles is to act as an endocrine organ, releasing hormones into the maternal circulation to maintain and coordinate gestation” (Smith and Bowe 2021, 42). Specifically, although the “placenta is arguably the most important organ of the body,” paradoxically it is

the most poorly understood. During its transient existence, it performs actions that are later taken on by diverse separate organs, including the lungs, liver, gut, kidneys and endocrine glands. Its principal function is to supply the fetus, and in particular, the fetal brain, with oxygen and nutrients (Burton and Fowden 2015).

The placenta takes on many of the roles of the pancreas until birth, illustrating that it must be completely developed to be functional, and raising the problem that it is useless, or worse than useless, until it is functional (Newbern and Freemark 2011).

The common hypothesis for the evolution of the pancreas is that the “earliest vertebrates likely possessed diffuse islet organs associated with the bile duct as found in extant jawless fish lineages” (Mulley et al. 2014). Specifically, the Cyclostomes (eel-like jawless vertebrates with a round sucking mouth that includes the lampreys and hagfishes) do not possess a “discrete pancreas,” but some cells “in the liver and in the wall of the intestines seem to be homologous to the endocrine tissue of the pancreas of the higher vertebrates” (Goin and Goin 1965, 203). The evolutionary theory postulates that “originally, the intestine itself was presumably the place of production of all of the enzymes that it uses” (Romer and Parsons 1986, 394).

In contrast, the Chondrichthyes (fishes with a cartilaginous skeleton) “have a fairly well developed pancreas” (Goin and Goin 1965, 203). Furthermore,

a distinct pancreatic gland with endocrine (insulin, glucagon, and somatostatin) and exocrine (digestive) functions is a jawed vertebrate innovation and only coelacanths and tetrapods possess a four hormone (insulin, glucagon, somatostatin, and pancreatic polypeptide (PP)) organ. Many of the key genes in jawed vertebrate pancreas development and function are members of multi-gene families (Mulley et al. 2014).

Since soft tissue is usually not preserved in fossils, living animals are used by evolutionists to construct plausible evolutionary scenarios. However, in this case, no examples of progressive pancreatic evolution are known in living animals. This is because most structural and functional parts of the pancreas must exist and be integrated as a complete unit in order to function. This is why the animal pancreas utilizing the same design employed for the human pancreas is common to all vertebrates (Whitcomb and Lowe 2007); not due to common ancestry but because they all originated from the one Designer and Creator of all things. Furthermore, most pancreatic peptide-like proteins, such as the preprosomatostatin are, as far as is known, common to all vertebrates (McDermed 1983, 312; Whitcomb and Lowe 2007).

Furthermore, genetic study has documented conservation of vertebrate pancreas function at the molecular level, meaning that the putative “more primitive” animals had very similar, or identical, molecular design existing in the pancreas of the more-advanced animals (Mulley et al. 2014).

The pancreas, like the heart, is indispensable for vertebrate life. Hormones and supplements can extend the lifespan of those lacking a healthy pancreas for a few months, even, in a few cases, a few years, but a compromised pancreas drastically shortens lifespan compared to persons with a healthy pancreas. All vertebrates have a pancreas of very similar design and no invertebrate has a pancreas. Invertebrates utilize a very different body plan and design, and no evidence exists of a primitive pancreas.

All known pancreases are of very similar design and function (Tsuchitani, Sato, and Kokoshima 2016). Furthermore, the chasm between the vertebrate pancreas and invertebrate life lacking a pancreas is so great that even “just-so” stories of the evolution of a non-pancreas into a pancreas have not even been attempted. The only supportive observation, that certain life-forms also possess some of the cells that produce the identical hormones and enzymes that the pancreas produces, does not even begin to bridge this great taxonomic divide.

Newbern, Dorothee, and Michael Freemark. 2011. “Placental Hormones and the Control of Maternal Metabolism and Fetal Growth.” Current Opinion in Endocrinology, Diabetes, and Obesity 18, no. 6 (December): 409–416.

Smith, Lorna, and James Bowe. 2021. “The Pancreas and the Placenta: Understanding Gestational Diabetes and Why Some Islets Fail to Cope with Pregnancy.” Biochemist 43, no. 2 (April): 42–46.

Tsuchitani, Minoru, Junko Sato, and Hiroko Kokoshima. 2016. “A Comparison of the Anatomical Structure of the Pancreas in Experimental Animals.” Journal of Toxicologic Pathology 29, no. 3 (July): 147–154.

Approximately between 1860 and 1930, in some cases even later, there was a discussion about flint findings from Paleocene to Pliocene strata which were similar to tools.

This present study should end charges against creationists that classification of australopiths as human or ape is arbitrary and meaningless.

Fraud and Forgery in Paleoanthropology

A review of the history of paleoanthropology leads to the conclusion that the discipline is far less objective than that for physics, chemistry, or even biology.